King Felipe has decided to grant his daughter, Princess Leonor, the Collar of the Golden Fleece. 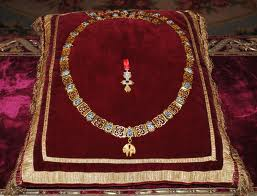 The collar, once reserved for males, is the highest decoration the Spanish Monarch can grant.

King Felipe giving the collar to Princess Leonor — heir to the throne and officially Princess of Asturias — coincides with her 10th birthday.

King Felipe has strengthened his calls for Spanish unity amid ongoing talks in region of Catalonia about secession.

Pro-independence candidates recently won elections to the Catalan Parliament, but failed to get a majority of overall votes.

His Majesty addressed the issue indirectly during remarks at events surrounding the prestigious Princess of Asturias awards — formerly knows at the Prince of Asturias Awards.

The King said, “Let us separate ourselves from everything that pretends to differentiate or reject one another.”

Filmmaker Francis Ford Coppola was one of the award recipients at the Campoamor Theater in Oviedo, Asturias.

Kerry was on a brief official visit to Spain following an agreement over U.S. troop presence there.

Spain and the U.S. also penned a deal to clean up pollution stemming from an accident involving nuclear weapons during the 1960’s.

The Secretary of State was scheduled to be in Madrid earlier this year but suffered a cycling accident in France.

Members of the Royal Family have had a busy several weeks. Also on Monday, King Felipe and Queen Letizia held a gathering of the Cervantes Institute leadership and Ibero-American ambassadors at El Pardo Palace.

Queen Letizia presided over events dealing with nutrition and journalism in recent days.

His Majesty was attending an Iberoamerican Forum summit in Barcelona when he shoot hands with Mas, along with other dignitaries.

The King has worked to portray normal relations between the Crown and Catalan leaders, even amid their threats of secession.

Spain’s Royal Family celebration National Day with the customary military parade in Madrid and a reception at the Royal Palace.

The day is meant to celebrate Hispanic heritage and the country’s sponsorship of Christopher Columbus’ travels to the new world.

The celebrations come amid deep divisions in Spain about national identity and whether to even celebrate Christopher Columbus.

They also come ahead of national elections in December, which may see significant changes in leadership.

Roughly 2,000 people received invitations to the palace reception and Albert Rivera, head of the rising party Ciudadanos, was among the big names in attendance.

Pablo Iglesias, the leader of left-wing party Podemos, thought he hadn’t received an invitation to attend the Royal Palace reception.

Even though it turned out to be a mix-up, Iglesias ended up skipping the event.

Leaders of both autonomous communities declined an invitation to the festivities in Madrid.

Spectators spotted Queen Letizia at a U2 concert in Barcelona over the weekend, according to media report.

The Queen went to the concern with friends on Saturday after a brief trip to Germany on Friday.

Don Carlos, head of the House of Bourbon-Two Sicilies, and King Juan Carlos’ cousin, now rests at the Royal Pantheon at the Royal Site of San Lorenzo del Escorial.

It was the first time in months than King Juan Carlos and Queen Sofia are seen together. Media reports indicate he has taken back to sailing, buying an antique craft in Finland.

Infanta Elena and Infanta Cristina were also at the funeral. The latter will be in court in the coming months, accused of cooperating with her husband in a corruption scheme. Both have denied wrongdoing.