Catalan separatist leaders are requesting a meeting with King Felipe later this week.

The King is scheduled to make a visit to Catalonia and the new government there, led by nationalists, has said it will not welcome the monarch with normality.

Catalan separatists see the King as siding with unionists, especially after a strong speech supporting unity and the rule of law.

The Catalan leaders say they want to open a dialogue with the King where he recognizes the region’s right to self determination.

Update: The Spanish government vetoed the meeting between the King and Catalan leaders, saying it was political in nature. The new prime minister is looking to meet with the new Catalan president in the coming weeks.

The meeting capped the King and Queen’s trip to the U.S., which also included stops in New Orleans and San Antonio.

Their Majesties were helping those cities, both with Spanish roots, celebrate their tricentennials.

The King Felipe and President Trump spoke briefly to highlight shared values and the president’s potential trip to Spain.

His Majesty also made stops at the World Bank and Inter-american Development Bank in Washington, D.C.

King Felipe and Queen Letizia touched down in the U.S. today for the beginning of a brief your.

Their Majesties landed in Louisiana and will then move to San Antonio and Washington, D.C.

They are scheduled to meet with President Trump at the White House on the 19th.

Several articles have appeared in recent weeks pointing out warm relations between the Spanish Royal Household and the gay community.

But that wasn’t the first gesture. After taking over as monarchs, King Felipe and Queen Letizia made a point to invite the LGBT community to royal receptions.

King Felipe was also the first royal to appear on the cover of a magazine geared toward the LGBT community.

Their Majesties will stop by the White House during a tour of several U.S. cities.

The last time the King and Queen were in Washington, D.C., was to meet with President Obama.

The Spanish Royal Household made a strong effort to meet with the Obamas. King Juan Carlos was the first head of state to visit President Obama at the Oval Office.

King Felipe today swore in ministers for the new Spanish government under the Socialist Party. The ministers took their oath at Zarzuela Palace, without a Bible and crucifix, much like the new prime minister. 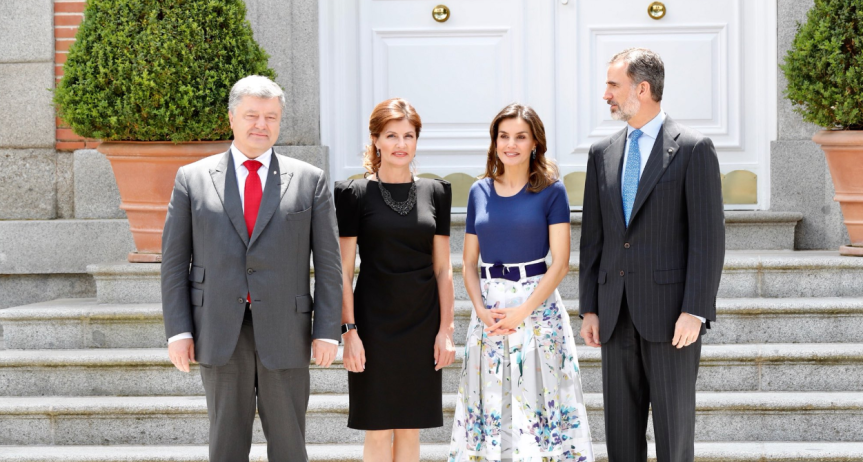 The King also met at the small palace of La Quinta with Spanish leaders who help steer an advisory board on international relations, a subject His Majesty is keen on.

Queen Letizia was in Brussels in recent days for an European Union development conference.

This week the King also accepted credentials from a variety of new ambassadors to Spain.

It was the first time a censure motion in parliament changes the country’s leader of government.

The swearing-in was also the first one without a Bible and a crucifix next to the Constitution.

Sánchez, a Socialist, acknowledged the King and pledged loyalty to him, but did not bow as many monarchists do.

Sánchez led a censure motion against Rajoy over corruption allegations. It was the first to succeed in Spanish history.

Congress President Ana Pastor delivered the notice to His Majesty at Zarzuela Palace soon after the vote.

Sánchez will take the oath of office before King Felipe Saturday morning.