King Felipe and Queen Letizia are in Poland with other world leaders today to mark the 75th anniversary of the liberation of Auschwitz.

Their Majesties laid a wreath at the site and made an offering at the Holocaust Memorial.

The King attended a leaders forum and a dinner hosted by Israeli President Reuven Rivlin. He also met with Spanish Jewish leaders.

King Felipe and Queen Letizia hosted Rivlin and his wife for a state visit in recent months. Their Majesties welcomed the Palestinian leadership soon after, but the events were more muted.

King Felipe is preparing to for the Solemn Opening of the Courts, the opening of parliament, in the coming days.

Earlier this month His Majesty swore in Prime Minister Pedro Sánchez, who is leading a left-wing coalition government with Podemos.

The King last week swore-in other members of the incoming government at Zarzuela Palace.

Sánchez’s Socialist Party is also nominally republican in nature but many of its members have come to appreciate the King’s role.

The Spanish Royal Family has always looked to keep good relations with rulers in the Arab world.

Infanta Pilar, the Duchess of Badajoz and King Felipe’s aunt, has died, media outlets reporter this morning. She was 83.

The infanta was daighter of Infante Juan, who went by the title of Count of Barcelona, even though he was never officially Spain’s king and lived in exile.

Sánchez took the oath to the King and the Constitution without a Bible of crucifix, as used to be customary.

Don Felipe joked Sánchez getting the premiership was easy but more difficulties were yet to come.

The president signed a royal decree after Sánchez won a vote in the Congress of Deputies following months of political stalemate.

Congress President Meritxell Batet met with the King in his office at Zarzuela Palace to formalize the appointment.

The so-called Pascua Militar takes place on Epiphany and is meant to commemorate the armed forces and address Spain’s defense needs.

The King said the military remained committed to defending the Constitution and the country’s interests. 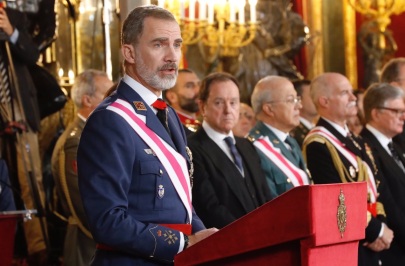 King Charles III started the Pascual Militar in the 1700’s. King Juan Carlos resurrected the tradition when he became king.