The Royal Household excluded King Juan Carlos from an event at the Spanish Congress to commemorate the country’s transition to Democracy, according to several media outlets.

But, according to media outlets, the Royal Household thought it was out of protocol for Don Juan Carlos to attend the ceremonies.

Media outlets reported that the elder King expressed his dismay about the snub to friends.

King Felipe won praise but also skepticism earlier this month when he attended a charity bullfight in Madrid.

Aside from people who oppose the activity, aficionados wondered whether the King — who got a standing ovation — really stands with them.

Don Felipe has not been as keen on attending bullfights compared to his father, King Juan Carlos, and his sister, Infanta Elena.

Both of them were helping open a new winery in the Basque Country during the Madrid bullfight.

Conventional wisdom says Queen Letizia is not partial to bullfighting. Neither is Queen Sofia, an animal rights advocate.

The late Duchess of Alba was also an animal rights advocate, but an ardent supporter of bullfighting as a Spanish tradition.

King Felipe received another batch of new ambassador credentials at the Royal Palace in Madrid this month.

But unlike previous times, the Royal Household released images of a horse-drawn carriage transporting the dignitaries through Madrid to the palace.

The Crown revived the tradition several years ago but it has not gotten too much attention. 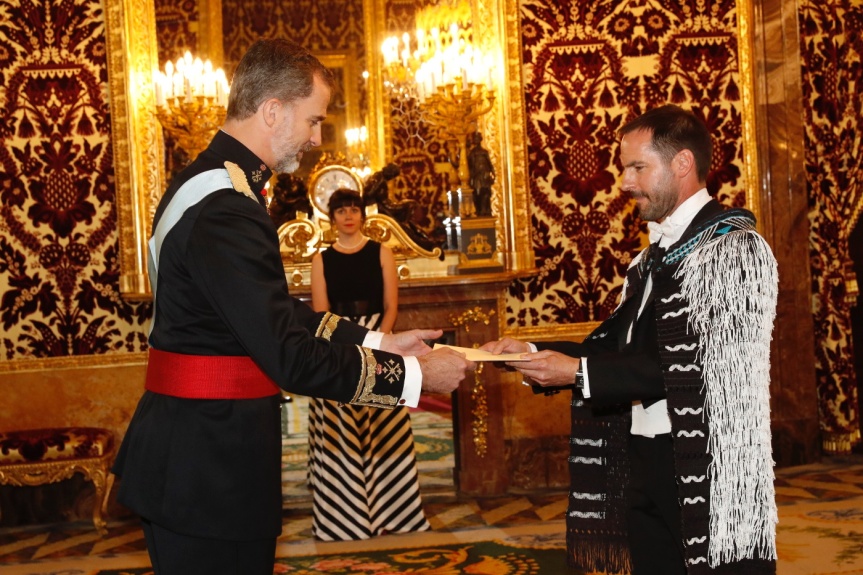 The carriage takes ambassadors from the Ministry of Foreign Affairs to the Royal Palace, where members of the Royal Guard help escort them to His Majesty.

The event is meant to promote the energy of the future, and Spain has made significant investments in renewable resources.

The King stopped by the Spanish embassy in Astana to sign a Royal Decree awarding the Grand Cross of Civil Merit to Ignacio Echeverría, who died in the recent terrorist attack in London.

His Majesty only spent one day in the Asian country.

Left-leaning politicians in the Spanish autonomous community of Navarra approved a resolution in favor of a referendum on the monarchy this week.

The vote happened the day before King Felipe and Queen Letizia were set to visit the National Center for Technology and Food Security.

Politicians in Navarra, which has taken a leftward turn, also recently moved to de-royalize the Prince of Viana awards.

Beyond the title of Prince of Asturias, the heir to the Spanish throne is also the Prince of Princess of Viana. The current holder is Princess Leonor.

The Spanish media did not give the referendum too much attention, mainly because of its symbolic nature.

Spain is still feeling the effects of the financial crisis and rising populism, which have hurt the monarchy.

Political corruption scandals and the conviction of Infanta Cristina’s husband for fraud have also taken a toll.

But it would be a mistake to say the monarchy is in peril, as many international news outlets like to say.

King Juan Carlos, who helped transition Spain to democracy and was once considered untouchable, had to abdicate amid several missteps.

But opinion polls show his son, King Felipe, gets much higher marks. Queen Letizia and Queen Sofia, Don Felipe’s mother, also do well with the public.

An El Mundo poll from 2015 has the monarchy at more than 60 percent. A Metroscopia poll the same year had the King’s approval at more than 80 percent.

Despite politicians, particularly on the left, bringing up issues like the monarchy, a Spanish Center for Sociological Investigations found most Spaniards are not concerned about it.