Infanta Elena, King Felipe’s sister, was the Royal Family’s representative to the Duchess of Alba’s funeral in Seville.

The Duchess, the woman with the most titles of nobility on Earth, died this week after health complications.

Members of the Royal Family sent their condolences immediately after her death.

The Duchess, as a Spanish Grandee, had a special status with members of the Royal Family, at least when protocol was concerned.

The King, for example, has traditionally called grandees “cousin.” The Duchess also had the privilege of entering the Seville Cathedral on horseback.

It is fitting for the Royal Household to have picked Infanta Elena to attend the funeral. She got married in Seville and is known to embrace the city’s traditions.

King Felipe and Queen Letizia made several stops around Rome today while on an introductory visit to Italy.

The new Spanish Monarchs, who have been introducing themselves to different neighboring countries, met with Italian President Giorgio Napolitano and his wife. 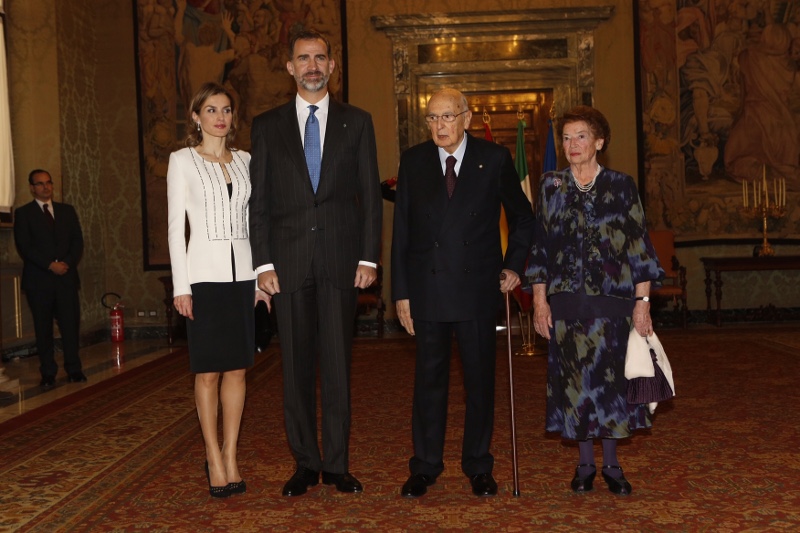 King Felipe highlighted his family ties to Italy. His father, King Juan Carlos, war born in Rome while in exile.

Spanish aristocrats and family members of the Duchess of Alba, the woman with the most titles of nobility in the world, have gathered at her palace in Seville awaiting her possible death.

Spanish media are reporting that the Duchess’ confessor arrived at Dueñas Palace today.

The duchess, 88, was rushed to the hospital with pneumonia in recent days.

Even though she is not a member of the Royal Family, the duchess is arguably the most well-known Spanish Grandee and a towering presence in Spanish society.

The Spanish Royal Household has for years been implementing budget cuts and transparency measures, efforts that have intensified since the proclamation of King Felipe.

Now Spanish media are reporting that members of the King’s Family — members beyond the nuclear Royal Family — will no longer be able to accept special perks, trips or discounts.

Members of the King’s Family include his sisters, Infanta Elena and Infanta Cristina, and his aunts, Infanta Pilar and Infanta Margarita.

Infanta Pilar said during a recent interview that royal perks nowadays amount to ease getting movie or bullfight tickets.

Allegations by a Spanish citizen and a Belgian citizen go back years. Both say they are the product of Don Juan Carlos’ extramarital affairs.

However, their cases never went far. Before his abdication, King Juan Carlos was “inviolable” under the Spanish Constitution.

King Juan Carlos is no longer inviolable under law, but the ruling conservative party made him, Queen Sofia and Queen Letizia only answerable to the Supreme Court.

King Felipe has been silent about the recent mock pro-independence referendum in Catalonia, where more than 80 percent of voters supported splitting from Spain.

Members of the Royal Family are, instead, continuing with their public agenda while no doubt dealing with the situation in private.

King Juan Carlos made comments widely interpreted to be against Catalan separatism before his abdication earlier this year.

And King Felipe has stressed Spanish unity and urged politicians to focus on economic growth during several recent messages.

While the Spanish Constitution doesn’t allow the King to make day-to-day political decisions, it falls on him to be an arbiter and moderator over the State’s political forces.

She no longer faces money laundering charges, Spanish media reported last week, and may avoid trial because of the difference of opinion between authorities about her guilt.

The Royal Household has expressed respect for the judicial branch. And she may, according to gossip, end up resigning her dynastic rights.