Prince Felipe expressed his commitment to the Spanish people and the country’s recovery from an ongoing bitter recession and sky high unemployment.

The heir to the Spanish throne made his comments during the Prince of Asturias Awards ceremony last week in Oviedo in the Principality of Asturias, located in the norther part of the country.

The Prince and his wife, Princess Letizia, who actually hails from Asturias, met with local leaders and award recipients at the Reconquista Hotel the evening before Friday’s awards ceremony.

During his keynote address the Prince said he carries out his responsibilities with “pride and confidence in Spain’s future.” He said every Spaniard, including himself, needed to give their all to help the nation recover.

The awards, hosted by the Prince of Asturias Foundation, have grown in international prestige. Winners included the Federation of Spanish Food Banks, the Red Cross, and soccer stars Iker Casillas and Xavi Hernández.

On Saturday, Prince Felipe and Princess Letizia made their way to the community of Bueño, which received an award for its efforts at promoting quality of life, and historic and natural preservation.

Prince of Asturias and Girona are official titles for the heir to the Spanish throne. Among the King’s numerous titles is Count of Barcelona.

The King met with the Indian leadership, along with local and international business leaders. Bilateral commerce between both countries was worth around $5 billion last year, the Royal Household said.

“Today our societies can only progress with a climate of openness, stability and security,” the King said during one of his stops. The King has made global trade a priority as a means of improving Spain’s ailing economy.

The King secured Indian support for Spain gaining a seat in the United Nations Security Council. Other agreements include investment in a Catalonian firm and more joint defense activities.

Media outlets reported that King Juan Carlos said the situation inside Spain makes him want to cry, but he also encouraged people not to be pessimistic about the country’s future.

Two Spanish courts have rejected claims from two people saying the are illegitimate children of King Juan Carlos. The Telegraph wrote this about Alberto Sola Jimenez from Catalonia and Ingrid Sartiau from Belgium:

In an interview earlier this year she said: “My mother told me who my father was while we were watching television. An image of King Juan Carlos flashed up and she said: ‘That man’s your father.'”

The pair met for the first time in June when they underwent DNA tests that show there is a 91 per cent chance that they have one parent in common.

However, the courts rejected their claims because the Spanish Constitution makes clear that the person of the King is “inviolable.”

The Royal Household has remained silent about the story, which has appeared in El Mundo and El Huffington Post, but has not been prevalent in many mainstream media outlets.

Prince Felipe and Princess Letizia were in Luxembourg this weekend attending the wedding of Prince Guillaume of Luxembourg and Belgian Countess Stephanie de Lannoy.

Their Royal Highnesses joined royals from around the world, including Japan. The wedding is being called the most significant royal event in Luxembourg in three decades. 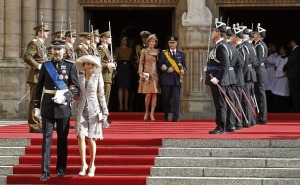 Queen Sofia has spent much of the week crisscrossing the South American nation of Bolivia, a source of immense mineral wealth for Spain during imperial times.

Her Majesty met with Bolivian President Evo Morales, who thanked the Queen for Spain’s efforts at helping his country.

The two also signed an agreement aimed at resolving the controversy over the discovery of coins from a sunken Spanish ship. Spain went to court to obtain possession of the valuable treasure.

But because the coins were minted in the imperial mining city of Potosí, Spain will allow Bolivia to host its own display of the find.

Morales, known as one of Latin America’s most outspoken advocates of indigenous rights, greeted the Spanish Monarch with warmth.

During the trip, Queen Sofia visited development projects backed by Spain, including the Queen Sofia Foundation.

King’s gets a rap

One of the students sand a rap for the King, which has become somewhat viral in Spain.

The contest was backed by the Spanish Institutional Foundation, a non-profit group which promotes the Monarchy among youth.

The celebrations, including a military parade, cost a fraction of what it did in previous years in keeping with times of austerity.

Amid talks of independence in that autonomous community, Prince Felipe told journalists that he is not worried about Catalonia and that the Crown would continue its commitment to all Spaniards.

At the Royal Palace, however, King Juan Carlos joked with journalists instead of talking about the Catalonian situation.

Also of note, Infanta Elena was not with other members of the Royal Family during many of the ceremonies.

The Royal Household told media outlets that only the the King, Queen and the heirs to the throne would be included in the main stand from now on.

“The time had to come,” Infanta Elena told reporters. She will continue to represent the Royal Family at official events.

The Infantas have usually been close to their father during important events, but things have changed amid Infanta Cristina’s absence from the family’s public affairs because of her husband’s corruption probe.

King Juan Carlos’ son-in-law, the Duke of Palma, Iñaki Urdangarín, has resigned from an advisory and leadership post at Telefónica Brasil, numerous media outlets are reporting.

Infranta Cristina’s husband is embroiled in a corruption probe, with prosecutors accusing him of using a non-profit he helped lead for private gain.

Earlier this year, Urdangarín announced he was taking a leave from his post at Spanish multinational Telefónica. As a result, the couple moved back to Spain full-time and left their Washington, D.C. area home.

The Duke and Duchess, which have not been participating in official events, are also not expected to be at the upcoming Hispanic Day activities.

Members of the Royal Family stunned crowds today by deploying at different locations around Madrid.

Prince Felipe, in a move that wowed many observers, walked around Madrid visiting his relatives and making a contribution.

The so-called Day of Flags is a top fundraiser for the Spanish Red Cross.

Prince Felipe and Princess Letizia completed another successful trip to Latin America last week, with stops in Panama and Ecuador.

The Prince and Princess of Asturias met with Panamanian President Ricardo Martinelli and his wife Marta Linares de Martinelli. They also attended a gathering of Spanish businesses in Panama.

Their Royal Highnesses highlighted the significant economic bonds between both countries, including Spanish firms participating in the expansion of the Panama Canal and a transit project.

Don Felipe and his wife then made their first visit together to Ecuador where the Prince met with President Rafael Correa.

Places around Spain have had a tough year. First with heat, drought and fire, and more recently torrential rains and flooding.

The Queen visited parts of Andalucía and Murcia, including a helicopter ride. Comforting people affected by disaster is one of her top strengths.