King Felipe and Queen Letizia made history this week by hosting the first official dinner of their reign for Chilean President Michelle Bachelet.

The Spanish Royals treated Bachelet to their usual pomp, including a receiving ceremony at El Pardo Palace, a meeting at Zarzuela Palace and a dinner at the Madrid Royal Palace.

The dinner was also the first event in a long time where the public saw Queen Letizia wearing a tiara.

This time, it was the one Gen. Franco gave Queen Sofia on behalf of the Spanish government on her wedding day with King Juan Carlos.

A Catalan student compared King Felipe to glue as part of a contest asking youth what His Majesty means to them.

The comparison can be called a complement, because the student basically meant to say the King was the glue that held the diverse country together.

With many Catalans holding anti-Spanish and anti-monarchist sentiment, the student’s expression, reported in Spanish media, must have been a welcome one to the Monarch.

King Felipe and Queen Letizia today welcomed Chilean President Michelle Bachelet, who is on an official visit to Spain.

Their Majesties officially welcomed Bachelet at the Royal Palace of El Pardo outside Madrid (which your blog host has visited).

El Pardo has long been in the Royal Palace collection, was General Franco’s former residence and is now official the official quarters for visiting heads of state.

After the welcome ceremony at El Pardo, Bachelet and Their Majesties met at the nearby Royal Palace of Zarzuela, within the Royal Family’s private compound.

Their Majesties have had a full agenda in recent days. This week Don Felipe stopped by Civil Guard installations at Torrejón Air Base.

Queen Letizia, meanwhile, made a short visit to Vienna to meet with local leaders and attend the opening of an exhibition of works by Spanish master Velázquez.

King Juan Carlos and Queen Sofia have also been at public events in recent days.

King Felipe used his bully pulpit to appeal for Spanish unity and common values amid separatist sentiments in Catalonia and Basque Country.

King Felipe, speaking at the 2014 Prince of Asturias Awards, hailed Spain’s economic, social and political process over the past few decades.

“Let’s feel proud of the good we’ve done together,” he said. “We are protagonists of the same path, And I am convinced that comprehension, affection, consideration and mutual respect are feelings found in the hearts of all Spaniards.”

The King’s words may seem routine, but they are telling and deeply strategic in Spain’s current political climate.

Among this year’s winners of the prestigious award, named after the heir to the Spanish Crown, were U.S. architect Frank Gehry and the Fulbright Program.

As is tradition, Their Majesties also visited a local Asturian community to highlight local efforts at improving residents’ quality of life.

King Felipe, the former Prince of Asturias, was 13 when he delivered his first speech at the awards ceremony. It was seen as a milestone in his preparation.

King Felipe and Queen Letizia this week made their first official visit as Spanish Monarchs to the Netherlands.

They visited King Willem-Alexander and Queen Máxima, plus a number of Dutch government officials.

The couples are said to have a close relationship, particularly the Queens, who recently sat together at the United Nations. Queen Máxima is from Argentina and, like Queen Letizia, is not of Royal birth. 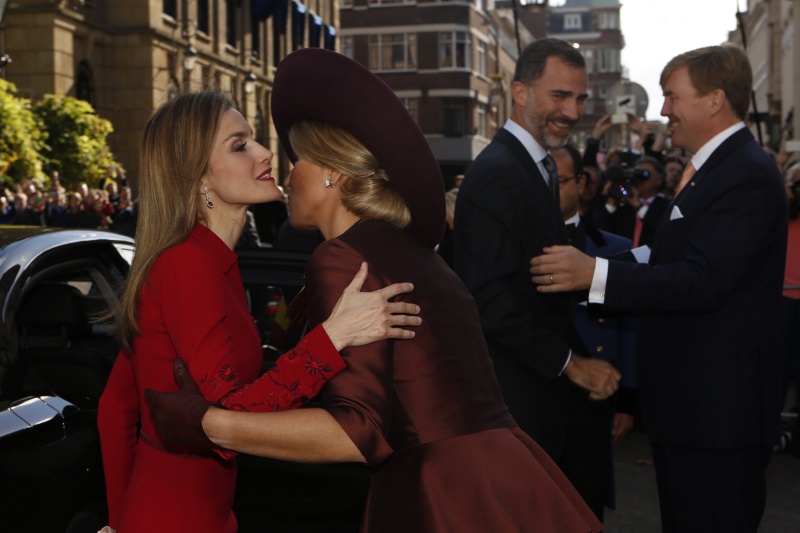 Separately this week, King Felipe opened this year’s session of the Royal Academies. Tradition calls for His Majesty to visit different academies every year. This time he went to the Royal Academy of Sciences.

Queen Sofia was at the Monumental Theater in Madrid on Thursday to award the Queen Sofia Musical Composition Award.

King Felipe and Queen Letizia presided this weekend over the first Fiesta Nacional event of their young reign.

The Fiesta Nacional, or National Day, involves a military parade in downtown Madrid. The Royal Family watches from an elaborate reviewing stand.

Princess Leonor, the new Princess of Asturias, and Infanta Sofia stood with their parents during the event.

The Royals then hosted a reception at the Royal Palace in Madrid. It included hundreds of guests from government and civil society, an expansion from previous years.

King Juan Carlos and Queen Sofia were not at the Fiesta Nacional this year, opting to leave the spotlight to the new King and Queen.

Separately, in recent weeks Spanish media reported that Rafael Spottorno, former head of the Royal Household under King Juan Carlos, resigned as a royal adviser because of allegations that he improperly used a credit card from bank Caja Madrid.

King Juan Carlos met this week with his wife Queen Sofia and his daughter-in-law Queen Letizia. It’s the first time Don Juan Carlos had been seen together with the Queens in months.

Media outlets have long questioned the closeness of King Juan Carlos’ relationship with both his wife and his daughter-in-law.

They used a traditional Red Cross fundraising event, where members of the Royal Family sit at tables around Madrid, for a display of unity.


Meanwhile, King Felipe made a visit this week to Royal Guard headquarters and accepted credentials from new ambassadors at the Royal Palace in Madrid.