The prince is close to King Felipe and has visited Spain regularly over the years.

The Spanish Royal Household has been more active on social media in recent weeks.

Even though the King’s aides have occasionally sent out tweets of mourning and celebration, those appear to be more common. 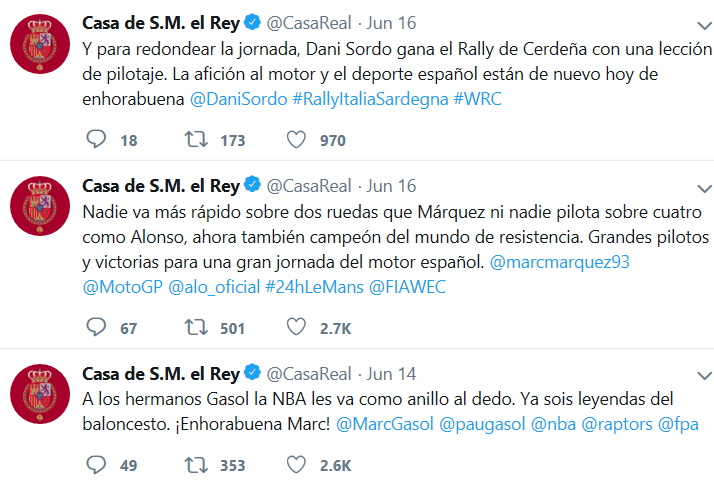 Queen Elizabeth has inducted King Felipe into the Order of the Garter, the British Crown’s top honor.

Queen Letizia was on hand to accompany her husband at the Windsor Castle ceremony this month.

King Juan Carlos inducted Queen Elizabeth into Spain’s Order of the Golden Fleece during the 1980’s.

Queen Letizia received a surprise embrace during an audience at Zarzuela Palace earlier this month.

A man in a wheelchair greeted her with a hug that threw her a bit off balance, but she returned his embrace.

Royal protocol generally frowns upon embracing a monarch, but Spaniards tend to be less strict about such customs, especially with members of the general public.

Princes Leonor will visit Catalonia later this year, her first official visit to the region as heir to the Crown.

Her Royal Highness, media outlets reported, will be present for the Princess of Girona Awards ceremony.

As heir to the Spanish throne, she is Princess of Asturias but also of Girona, a city north of Barcelona.

Infanta Elena, the King’s sister, made a rare official appearance this month at an awards ceremony for young artists.

The princess appeared at El Pardo Palace outside Madrid. Royal watchers recently said she was upset at not being on the official agenda more often.

Sánchez got the most votes, so it’s no surprised the King picked him to try to cobble together enough supporters.

Still, His Majesty met with numerous party leaders in his office at Zarzuela Palace before making his decision.

The King met with Laura Borrás Castanyer, who represents one of Catalonia’s main pro-independence parties. She declared her region had no King. Borrás told the King that former Catalan President Carles Puidgemont, who is a runaway from Spanish justice, preferred him as Crown Prince. The King then said he preferred Puidgemont in his former job as mayor of Girona.

King Felipe and Queen Letizia have been leading numerous events in recent weeks as Spanish politicians work to form a new government.

Today the King met again with Meritxell Batet, the new president of the Congress of Deputies, at Zarzuela Palace.

His Majesty will have several such meetings in the coming days with different party leaders.

Over the weekend, King Felipe and Queen Letizia were in Seville for a series of ceremonies for Armed Forces Day.

Late last month the King was in Germany for the Charlemagne Prize ceremony. The winner was António Guterres, United Nations secretary general.

On May 29, Queen Letizia was in Palma de Mallorca for a summit on school safety.

The Queen last month was also in Geneva for World Health Organization meetings.

The King presided over the King’s Cup football championship final in Seville on May 25th. The Queen leads a similar contest for women’s sports.