Prince Felipe and Princess Letizia completed another successful trip to Latin America last week, with stops in Panama and Ecuador.

The Prince and Princess of Asturias met with Panamanian President Ricardo Martinelli and his wife Marta Linares de Martinelli. They also attended a gathering of Spanish businesses in Panama.

Their Royal Highnesses highlighted the significant economic bonds between both countries, including Spanish firms participating in the expansion of the Panama Canal and a transit project.

Don Felipe and his wife then made their first visit together to Ecuador where the Prince met with President Rafael Correa. 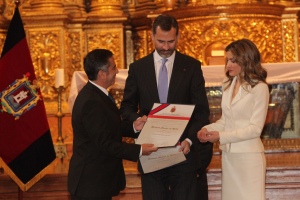