A new book by reporters for Spanish newspaper El Mundo is shedding some light into events that supposedly led to the ongoing corruption investigation against the King’s son-in law Iñaki Urdangarín.

The tome says that Urdangarin saw himself in financial trouble after buying what is often called a small palace in the exclusive Pedralbes area of Barcelona.

The book says that King Juan Carlos was upset at Urdangarin’s previous living arrangements with Infanta Cristina. Don Juan Carlos, it says, said his daughter was used to living in a palace and not a small apartment. 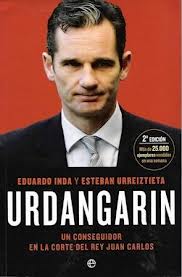 Also included is a story about Prince Felipe getting into an argument with Urdangarin over money. The reporters say the Prince was unhappy with his brother-in-law asking for help to pay for his expenses.

Adding to the drama, the book says that Urdangarin blamed Princess Letizia, a former journalist, for orchestrating at least some of his public troubles.

The Royal Household maintains that it told Urdangarin to give up his business dealings years ago.

One thought on “Urdangarin Drama Intensifies”